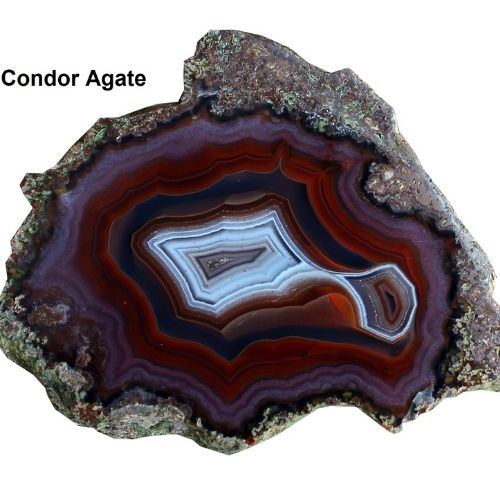 Agate: A Gateway into the Mineral Kingdom

Agate is a rock comprised of layers of cryptocrystalline quartz known as chalcedony. Each layer represents a different period of mineralization, and thus has a unique character. When different elements or mineral inclusions are taken up by the chalcedony layers, they may have specific colors or patterns. Although the exact mechanics of Agate formation can still be considered highly debated, the basic principles for formation require that a cavity fill with a mineral-rich fluid that deposits quartz one layer at a time. This means that in any Agate, the outermost ring is the oldest layer with a new layer being deposited one after another. The highly varied banding that results is what has set agate apart as a gemstone since 3000 BC, although in modern times these gems are valued based on their geographic source locality as well as their patterns. Since ancient times Agates have been used for adornments and household objects (both secular and sacred) because of their many mystical properties outlined below. First, let us take note of how different Agates get their names.

Agates can occur in a wide range of colors spanning the whole rainbow showing reds, oranges, yellows, greens, blues, violets, pinks, and of course the more neutral browns, blacks and whites. In some cases the banding is so thin and irregular that the Agate appears to be lacey, and might be referred to as a Lace Agate. Some of the best examples of these include Crazy Lace and Blue Lace. In other cases the bands are relatively thick and flat (as opposed to curved) and might be referred to as Onyx. If the Onyx has a primary color such as blue or orange, you might refer to it as Blue Onyx or Sardonyx, respectively. The term Agate can sometimes be misapplied to chalcedony with mineral inclusions that form non-banded patterns. These patterns could look like moss, ferns or plumes and may be known to the general public as “Moss Agate,” “Tree Agate,” or “Plume Agate,” but these are all technically misnomers. Regardless, these physical features comprise only one method of classifying an Agate; the other being locality.

If an Agate has highly contrasted yet equally portions of white and black bands that are flat and parallel, it may be a Banded Agate, but if it’s mostly black then it might be called a Black Agate despite the white. Furthermore if it’s from Botswana specifically, then it would be called a Botswana Agate. If the Botswana Agate had a different color, such as pink, then it would be referred to as a Pink Botswana Agate. In many cases Agates on the market are named first and foremost for the specific mine locality they come from much in the same way as Turquoise is named for the mine as opposed to its physical appearance. This is why you may hear of “River Crossing Condor Agate,” which means that it’s a variety of Condor Agate that comes specifically from River Crossing Mine.

As variegated as Agates can be in appearance, so too do they possess a wide range of metaphysical attributes. According to Pliny the Elder’s Natural History, Agates could imbue its wearer with inhuman strength, quench thirst, cool fevers, and cure venomous bites or stings. According to Knuth in Gems in Myth, Legend and Lore, Arabians value a special Agate known as “Aleppo” or “Eye Agates” for their ability to protect against the evil eye. In modern times and with the rise of global trade, the number of Agates on the market has grown by leaps and bounds. For this reason many metaphysical books that discuss the healing powers of crystals have a general “Agate” section followed by more specific listings for each specific type of Agate.

Here is an excerpt from Gems in Myth, Legend and Lore, in which Knuth synthesizes and summarizes the many properties of Agate:

Blue Lace Agate – opens and balances the throat; promotes positive expression, optimism, and truth; opens the senses on all levels of awareness

Fire Agate – stimulates the whole physical system, especially the endocrine systems…brings harmony and aids in the development of compassionate detachments. It is also used to balance sexual and emotional issues

Mexican Lace Agate – inspires happiness, the appreciation of beauty and aids in creativity

Despite the many write-ups that can be found on Agate, there are still many Agates for which written records of spiritual attributes do not exist or simply state the generic properties of "Agate". Some examples of such Agates that are newly on the market include Moctezuma Agate, Island Agate, Condor Agate, and Coyamito Agate. Laguna Lace Agate has just recently been described by some online sources, but even then it is mostly compared to Crazy Lace Agate. This might seem scary at first, but this is actually a gift for our generation. We have the opportunity to describe our own experiences with these newly discovered Agates in order to guide generations to come.