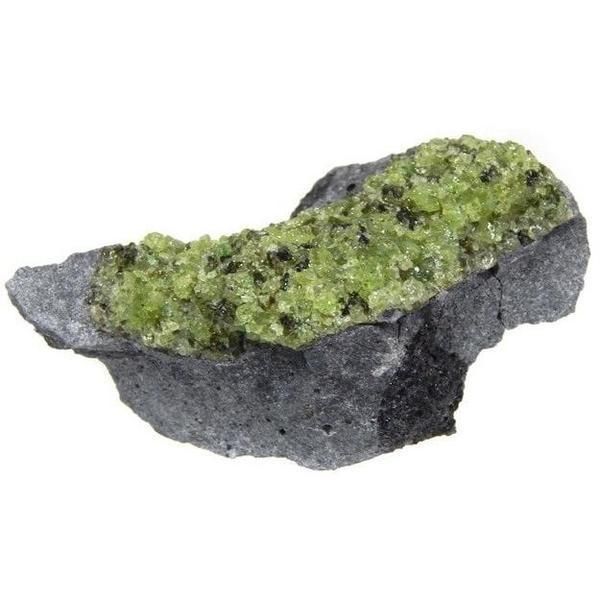 Peridot, the birthstone for August, is the gem version of the mineral Forsterite (Mg2SiO4) that belongs to the Olivine Group. The name Olivine comes from this mineral group’s range of olive colors. The iron-rich end member (Fayalite – Fe2SiO4) is brown to black while the magnesium-rich end member is almost chartreuse, and any mixture in between has a light to dark yellow-green hue. Peridot has been known by many monikers including “the stone of the Sun,” and was even believed to be visible at night by the ancient Egyptians because of its radiance.

Historians and gemmologists debate whether to say “pear-i-dot” or “pear-i-doh,” but ultimately it depends on your audience. For the general public, either pronunciation is considered correct. Most gemmologists and collectors would insist that “pear-i-doh” is correct. However, according to most sources the word peridot likely traces back to the old French word peritot, meaning golden. Since there is no root word for peritot in the French language, many believe that it was adopted from the Arabic word faridat, meaning gem. In this case, there would be a hard “t” at the end meaning that “pear-i-dot” would be correct. Ultimately it boils down to you say “poh-tay-toh” and I say “pah-tah-toh”. Regardless of this debated topic geologists today have a firm understanding of the origins of this gem material and have learned a lot by studying it.

To begin, let me give you a little geologic lesson. If you were to cut the Earth in half, you would notice that it has several layers. At the very center of the Earth is a solid inner core made up mostly of nickel (Ni) and iron (Fe). Surrounding this inner core is the outer core made up of molten Ni and Fe. The core is the hottest portion of the Earth. Surrounding the core, we have what is known as the mantle, which has two parts: the lower (inner) mantle and the upper (outer) mantle. The mantle is composed mostly of the olivine-rich rock known as peridotite due to its Peridot content. The lithosphere or crust is the thinnest, outermost layer of the Earth.

When the outer core gives off its heat, sometimes the lower mantle gets so hot that it melts to create an ultramafic mantle plume. The fluid plume is so much more buoyant than the overlying rocks that it violently tears through the peridotite-rich mantle as it rises. The material rises so quickly that it carries the peridotite from deep in the mantle all the way to the Earth’s crust where it gets erupted by volcanoes in basaltic lava. This is why the green peridotite xenoliths are generally found in dense black basalt rock. Peridotite is associated with other precious minerals that only form deep in the Earth such as chromite (the only source of chromium on Earth) and diamonds making it valuable beyond its gemstone potential.

Many would argue that Peridot has value beyond its gem status because of its metaphysical energies. Some say the stone can be worn to ward off enchantments and evil spirits, while others believe that it helps one to obtain enlightenment. Others associate the stone with monetary abundance and personal growth. The list goes on, but I will leave you, the spiritualist and the skeptic, with this food for thought…