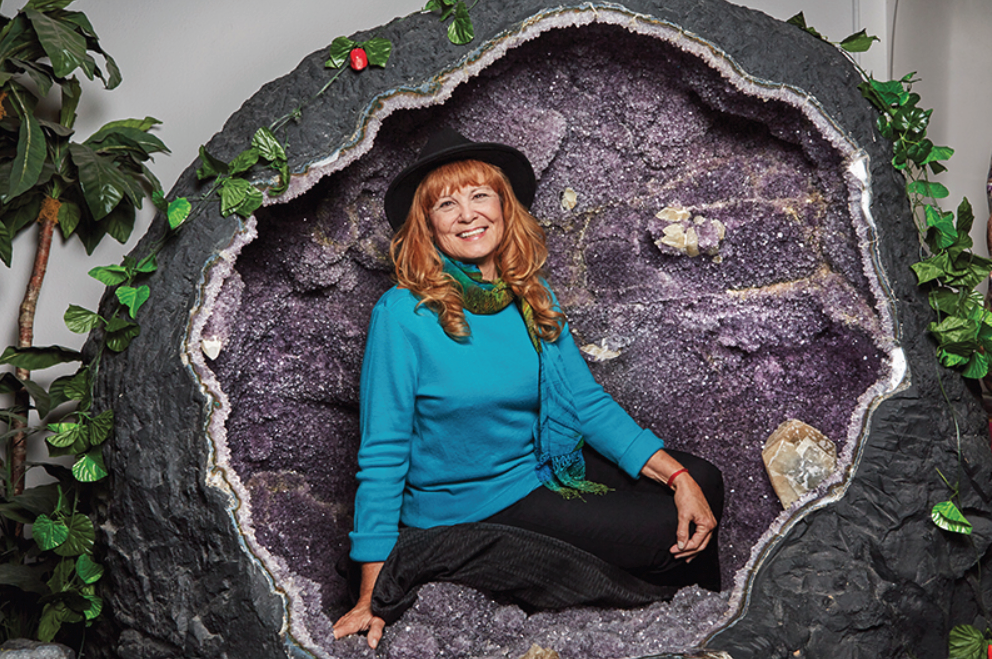 from a highly visible I-35 billboard for Nature’s Treasures since she opened her metaphysical rock shop in 2000. “Everyone feels like they know me

because they see me for two seconds every day. My energy really becomes a part of people’s lives,” she says.

In person, Richards’ energy is certainly contagious, and she wholeheartedly believes in the power of the rare gems and minerals Nature’s Treasures

is known for, saying, “Things are put in front of us every day to learn from and absorb, but if we’re not ready, we miss it.” At age 65, she speaks from

a lifetime of experience, guided intuitively by what she calls “the spirit” throughout decades of cross-country adventures, passionate romances and

nearly a dozen of her own businesses, which included a color copy and computer graphics company. In another life, she posed for Playboy and

crystals—an interest she shared with her late mother. She began collecting and selling gemstones over the next 15 years as she launched more

startups, including the still-active Texas Office Product Supplies, all while maintaining a daily practice of spoken affirmations to manifest what she

saw as her true purpose: to create the largest metaphysical rock shop in the world.

“The spirit always kept me connected to my calling, even before I knew what ‘it’ was,” she says. Now, she thinks of her 14,000-square-foot storefront

as a humbling benefit of educating others about crystals and spiritual healing via Nature’s Treasures’ various onsite lectures and workshops. “Seeing

people connect with crystals for the first time is life-changing,” she says. “If we open ourselves up and go with the flow, the universe has wonderful