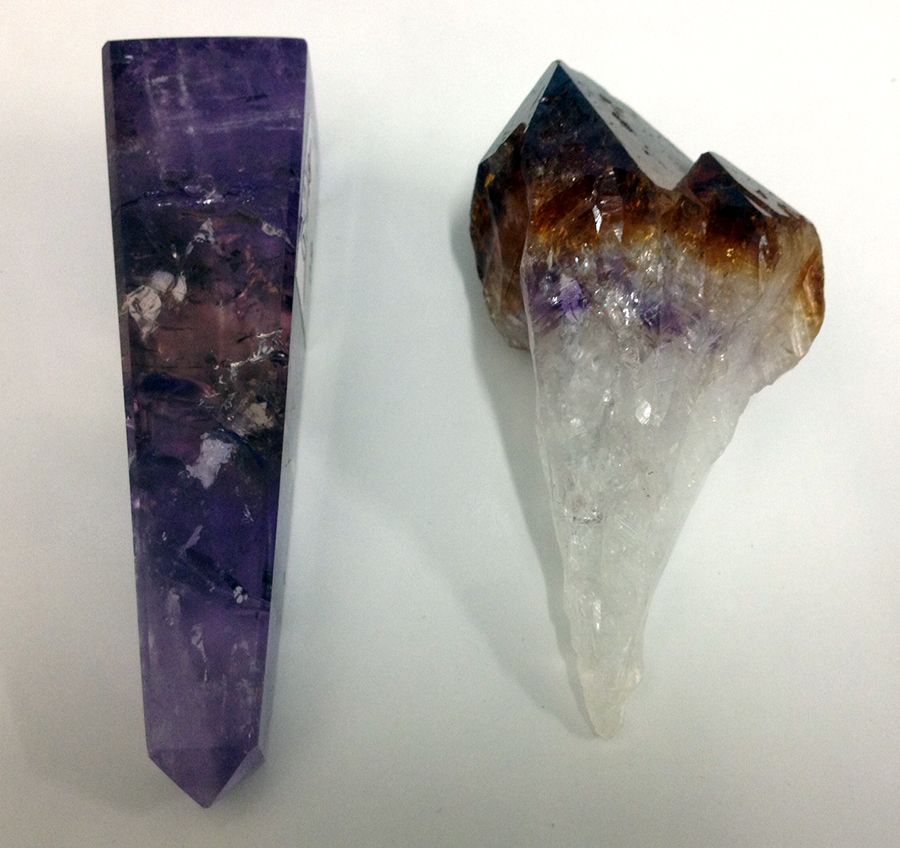 Ametrine is a rare gem variety of quartz named for its naturally occurring combination of purple AMEthyst with yellow ciTRINE. These two color varieties are believed to occur together because of a process known as twinning by which two chemically distinct quartz crystals intergrow. The amethyst gets its color from Fe4+, while citrine is colored by Fe3+. Synthetic versions of ametrine can be made in a lab, but this process is considered difficult and costly. Heat treatment of amethyst to create citrine cannot generally produce ametrine because heating causes all purple hues to turn yellow.

However, Nature’s Treasures of Texas recently received a batch of heat-treated amethyst (now citrine) that contained something interesting. Many of the citrine points received were dark golden brown or even black on the surface. Upon closer inspection, we noticed something unique about many of the citrine points…some contained traces of purple at their heart still! We theorize that when these citrines were baked, they were baked too hot for a short period of time (“flash heating”) causing the outside to “burn” and not allowing time for the inside to “cook” properly. This would be similar to when you make eggs sunny side up. Putting the egg on an already hot skillet results in the bottom of the egg cooking quickly, but leaving the egg yolk on top runny because the heat does not have time to cook through. Another example would be cooking a seared steak or blackened fish. The outside gets charred, but the inside remains rare. In the case of our heat-treated points, the exterior turned into citrine while traces of amethyst remained towards the interior! In order to avoid confusion with the naturally occurring ametrine (dominated by purple amethyst), we have coined the term “citrethyst” to describe this material in allusion to the dominant citrine color in this anthropogenic material. Everything happens in divine timing, and the appearance of citrethyst at Nature’s Treasures is no exception.

Let’s begin by looking at ametrine and what it represents to many in the metaphysical community. Purple has often been associated with spirituality. For example, purple is associated with the crown chakra, the seat of spirituality and connection to the Divine, in Eastern cultures. In the West, purple has often been called the “royal color,” where royalty is a Divine title. On the opposite end of the color wheel, we find the color yellow. Yellow is associated with the solar plexus chakra, the seat of will power and connection with drive and creativity. Free will and choice is what distinguishes humanity from the rest of the natural world. The natural combination of these two colors in ametrine reflects divine intervention and guidance of our own human will so that we might find healing and freedom from those aspects of our lives that consume us yet no longer serve us. While amethyst is sometimes called the “stone of well-being” and aids in emotional and spiritual healing, citrine is believed to be a stone of abundance and will power. The combination of these metaphysical properties makes ametrine a perfect candidate for helping combat various forms of addiction while providing insight in how to further our own lives. Ametrine is a material provided by Mother Nature.

According to Dante, “Art, as far as it is able, follows nature, as a pupil imitates his master, thus your art must be, as it were, God’s grandchild.” What he means by this is that our creations as the children of God, make our creations the grandchildren of divinity. Citrethyst can be thought of much in the same way, for although it is not purely natural, it is humankind’s reflection or recreation of natural beauty. Just as humankind takes herbs and ores to create medicines and tools, so too have we taken the crystal energies of ametrine and recreated them as citrethyst. In citrethyst the dominant yellow color reflects the free will of humanity and the joy in that freedom while spirituality, represented by purple, resides at its heart. During a time when our world seems so disconnected from the Divine, citrethyst helps to remind us all that the free will setting us apart from the rest of nature also empowers us to live divinely. Citrethyst therefore empowers us in our choices to utilize our resources for the healing and nurturing of the world around us.