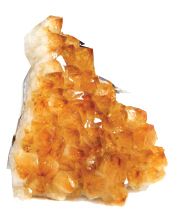 Citrine, the golden variety of quartz, has long been sought after by collectors for its vibrant color and by healers for its ability to dispel gloom and manifest wealth. However, much of the citrine found on the market today began as a very different member of the quartz family, purple amethyst!

Through a process of heating, the purple variety of quartz sheds its royal color to dawn itself in golden hues. We recognize that there are many schools of thought in the scientific and the metaphysical communities, some of which believe that anthropogenic colors in minerals negatively impact their value. For example, the most common dislike of human-altered coloration of stones is in the dyed agates. However, many argue that despite the colors being completely unnatural, they provide a benefit owing to their aesthetic and the psychological practice of Color Therapy. Similarly, many individuals dislike citrine that has been heat-treated because the color simply is not natural. This is most frequently true in the metaphysical community, where the "baking of amethyst" to create citrine is sometimes viewed as misleading.

The rock-hounding and lapidary communities generally accept heat-treated citrine as a valid means of obtaining specimens.

To truly understand colors in minerals, it is important to note that minerals can be idiochromatic (same colored) or allochromatic (other colored). Idiochromatic minerals get their colors from elements within their chemical formula.

For example, malachite is always green because of the oxidized copper in its chemical formula Cu2CO3(OH)2. Allochromatic minerals, on the other hand, get their colors from something other than the elements in their chemical formula. Allochromatic minerals in their purest forms are colorless. When an impurity (mineral, molecular or elemental) or imperfection occurs in the crystalline structure, these minerals become colored. These coloring agents are known as chromophores, and cause minerals such as quartz to take on different colors macroscopically in the presence of various impurities.

Citrine is a variety of the allochromatic mineral quartz (SiO2) and has been defined by lapidaries, historians and the scientific community as the yellow or golden variety of quartz. The cause of the golden color, while still debated, occurs from a chromophore substituting for silica (Si4+) in the crystal lattice. Some say that the substitution is by aluminum (Al3+) while others say it is by iron (Fe3+). The mechanism for the color does not change the definition of golden quartz as citrine in either case.

According to relatively recent research, the presence of iron in quartz causes the purple variety known as amethyst. Iron (Fe3+) replaces some of the silica (Si4+) and then becomes oxidized to Fe4+ through natural irradiation in the Earth. The Fe-O (iron to oxygen) bonds absorb yellow-orange wavelengths of light resulting in us seeing a purple color. Upon heating the Fe4+ possibly becomes reduced to Fe3+ and changes the nature of the Fe-O bond causing us to see a golden color instead.

Therefore the change that occurs in heated amethyst to turn it golden makes it citrine by definition. The varieties of citrine that occur in nature can result from a similar process whereby amethyst becomes baked within the Earth instead of in an oven.

In terms of the subtle energies of crystals in the metaphysical community, color has often been a general indicator of what a stone's metaphysical properties are, loosely based on the chakra system and psychology. Regardless of which school of thought one credits, energy takes many forms (light, vibration, electricity, etc). In the case of crystals, minerals, and rocks, the energies theoretically result from the electron bonds holding atoms together in the crystalline lattice. The electrons that form these bonds resonate or vibrate based on which elements are connected and how. If the bonds vibrate at one frequency and wavelength, then one color is visible and if they vibrate at another frequency and wavelength, then another color is seen.

Ultimately the color represents the vibration of the stone, which is why stones of similar colors generally fit into a common metaphysical theme.

In the case of heated amethyst becoming citrine, the change in the atomic structure (and associated "vibrations" of the iron-oxygen bonds) results in the vibration of the crystal changing as well. This change in vibrations, although not natural, is no less real. Since the vibrations result from similar atomic bonds found in natural citrine, one could extrapolate that the properties would also be similar.

That all being said, there is still much debate on the color-forming process in natural citrine, and the exact chemical reactions and structural changes may be oversimplified here.

I personally believe that the energies in natural and human-altered stones are different, but I cannot speak for anyone else. For some the natural process that occurs over thousands to millions of years is what gives the stones their energies even though the processes may be imperfect.

Synthetic stones are perfected (chemically and structurally) on the atomic level, so theoretically they have the energetic properties of their natural counterparts that are more intense or effective. Human-altered natural stones can be viewed as "diminished" because of tampering or viewed as intrinsically infallible due their "timeless experience" during formation.

The possibilities and viewpoints are endless, so I have simply chosen to reconcile my beliefs with those of others rather than dictate others' decisions, beliefs or way of life.

Our beliefs and approaches in life are inherently personal and based on our own experiences. Ultimately, very few scientific studies have been conducted with the intention of "proving" the effects of subtle, metaphysical energies of crystals on living things, so while some may say "the truth is out there" I would encourage you to live by the premise that "my truth is within me".