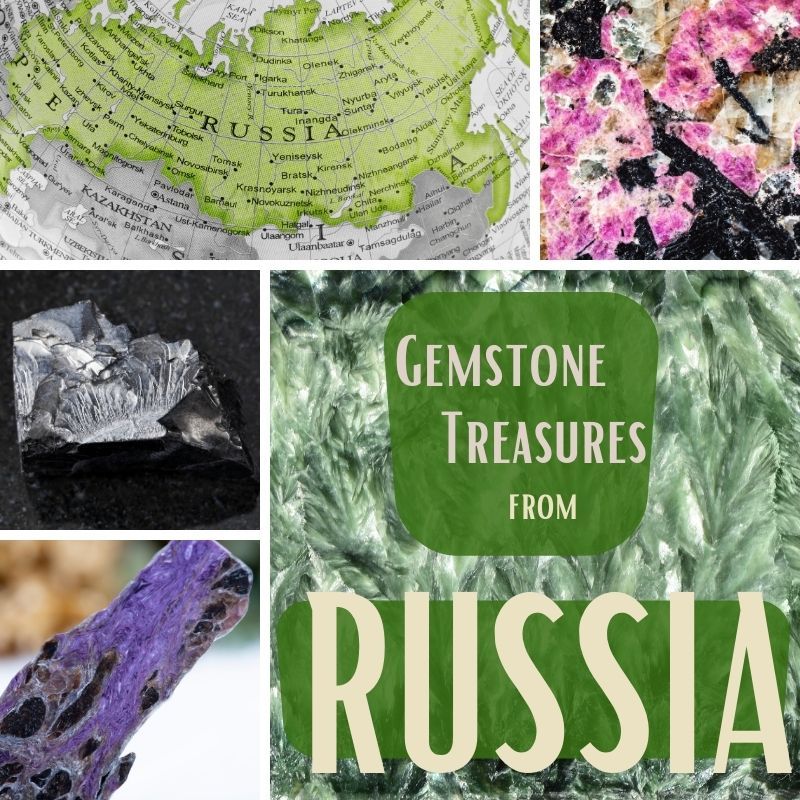 Russia, a nation of mammoth proportions, expands across two continents and eleven time zones--that’s a lot of space and time! Consequently, Russia is rich with natural resources. Digging down deep, below layers of wintery precipitation and Earth, you find some of the most rare, enchanting, and prized gemstones for the metaphysically minded: Charoite, Seraphinite, Eudialyte, and Shungite.

Russian stones--a lay of the land

Siberia is a location where Charoite, Seraphinite, and Eudialyte are mined. (Another significant deposit of Eudialyte is found in the Kola peninsula, in the extreme northwest region of Russia.) All three can be found in the regions near Lake Baikal, in the southern part of eastern Siberia. Lake Baikal is a crescent-shaped lake with a backdrop of pristine forests and mountains. It happens to be the world’s oldest and deepest lake, holding the largest volume of fresh water on the planet.

Lake Baikal has been acknowledged as a power spot, a holy place, and a living deity by the indigenous shamanic people, the Buryats. James Tyberonn, a renowned Geologist and metaphysical teacher recognized Lake Baikal and the surrounding area as a global vortex that is significant for planetary ascension. He reports that the crystals and stones from there are imbued with potent spiritual frequencies.

The Shun’ga village in the Karelia region of Russia is the main locality for Shungite. Throughout history, people flocked to the area to experience the healing springs and the waters of Lake Onega--the bottom of the lake is covered with Shungite. This area is also considered to be a sacred site to the Sami shamans, and archeological digs have surfaced labyrinths and sacred stone structures that date back to 6000 BCE.

As you can imagine, Russia’s harsh weather and terrain make mining a difficult and costly endeavor. Russian Charoite and Seraphinite, in particular, are challenging to mine. They are considered rare and can be more expensive. Eudialyte and Shungite are still classified as rare, but they are becoming more easily obtainable.

Metaphysical properties of the Russian stones:

Charoite: Charoite is a must-have metaphysical stone that works on all levels of the being. It is a beautiful, complex stone with undulating shades of purple, sprinkled with black, white, grey, and gold inclusions.

The purple ray works with the crown and third eye chakras to bring in higher light frequencies for spiritual and psychic awakening. The black dendritic inclusions have a grounding and balancing effect on the physical, mental, and emotional bodies. Therefore, Charoite helps you

to access your soul’s energy, wisdom, love, and mission, while anchoring and grounding it into your physical body and reality.

Charoite assists your body to safely process, regulate, and ground higher frequencies. This prevents you from getting overloaded or overwhelmed by big influxes of light, which are prevalent in these times due to solar activity, Schumann resonance spikes, and astrological forces. If these higher energies are not properly processed by the physical body, uncomfortable “ascension symptoms” can result, such as headaches, digestive imbalances, dizziness, and fatigue. Charoite can prevent and relieve these symptoms.

On a spiritual level, Charoite enhances your intuitive, psychic, and clair-senses, while fine-tuning your healing abilities. It helps you to discover and align with your highest path of service. Working with it increases synchronicities and moves you into a higher energetic flow. On a mental level, Charoite sharpens your mind and increases your discernment and analytical abilities, so that you can ascertain what is true for you and what is disinformation. On an emotional level, Charoite expands your love and self-acceptance. It harmonizes the emotional and spiritual bodies, allowing for a greater experience of Divine Love and Oneness in your life.

Charoite strengthens, replenishes, and heals many systems of the body, and it can even help to transform illness into wellness. It highlights the underlying causes and patterns that lead to imbalance and disease. It brings the root causes into your conscious awareness so that you can make necessary changes to correct them.

Charoite is also a clearing stone that brings in the purple ray to transmute lower energies, emotions, thoughts, and outside interference. It has a powerful cleansing effect on the auric field, the chakras, and the emotions. It is especially useful for releasing fear patterns that prevent forward movement.

Seraphinite: Seraphinite is a powerful and enchanting variety of Clinochlore. It is dark green with silver wisps running through it that mimic the appearance of angel wings. Seraphinite gets its name from the highest order of angelic beings: the Seraphim. Working with it can raise your vibration and consciousness to the divine and angelic realms. It also delivers the love and care of the Divine Feminine, while attuning you to frequencies of wholeness and harmony.

Known as a stone of glowing health, many regard Seraphinite as one of the top healing stones for these times. Seraphinite has a purifying effect on the chakras, meridians, and aura. It works on spiritual and karmic levels, connecting with angelic energy to help heal disease resulting from past life experiences. It clears energy blockages and belief patterns that contribute to illness while aligning you with your divine blueprint of perfect health.

Seraphinite has been known to recode the DNA, and it is one of the best stones for cellular rejuvenation. It is effective for treating systemic imbalances or diseases, and it is even known to help combat cancer. Many also work with it for detoxification, pain relief, and healing negative feelings about the body.

Eudialyte: Eudialyte is a physically and energetically complex stone that ranges in color from magenta, pink, rose, red, yellow-brown, violet, green, and red-brown. It is one of the best stones for activating the zeal chakra. The zeal chakra has a magenta color ray and is located at the back of the neck and the base of the skull. When it is fully activated, this center regulates multi-dimensional telepathic communication. Awakening the zeal chakra assists the kundalini in rising, and you experience an increase in clairvoyance, clairaudience, astral travel, vivid dream-recall, healing abilities, empathy, and telepathy.

When held for one hour, it has been demonstrated that Eudialyte can measurably increase both your alpha and beta states simultaneously. The beta state is your every day, alert level of consciousness, and your alpha state is your creative, daydream state. In alpha, you are accessing your imagination, intuition, and higher-dimensional connection. Eudialyte helps you to develop telepathy, clairvoyance, clairaudience, and channeling abilities. It serves as a fine-tuner of transmissions, helping you to home in on the important incoming vibrational information and tune out any extra noise.

Eudialyte clears the channel from the crown to the root chakras, encouraging the rise of the kundalini energy. It is known to increase the flow of synchronicities in your life. It harmonizes your mental and emotional bodies, and it connects your spiritual body with your physical experience. Eudialyte heals the emotional body and self-worth issues. It attunes you to greater levels of universal love and joy while helping you to express these energetic states in your physical life for the good of all.

Shungite: Known as a miracle stone, Shungite is over 2 billion years old and is composed mainly of carbon. Most geologists believe that the deposit was created by layers of ancient organic material and algae. What’s exciting about Shungite is that it has a wide array of beneficial energetic properties due to a powerful and rare secret ingredient: fullerene molecules.

Fullerenes are hollow molecular carbon cages that form into the sacred geometry shape of the dodecahedron, which looks like a soccer ball. Fullerenes are a relatively new discovery, and scientists are finding that fullerenes have healing, protective, anti-inflammatory, antimicrobial, and detoxifying qualities. Russian and Ukrainian scientists have demonstrated that the fullerenes in Shungite help to neutralize many forms of negative energy, including EMFs and geopathic stress. In Russia, Shungite has been integrated into water purification systems since the 90s, as it safely removes harmful substances and contaminants.

Shungite comes in three grades: Black or Regular, Petrovsky, and Elite or Noble.

· Black or Regular Shungite is the most common form, which contains between 30 and 50% carbon.

· Petrovsky Shungite has a carbon content between 50 and 70% and is a grayish-black color.

· Elite or Noble Shungite has an extremely high carbon content, 98%, and is the purest and rarest form. Only about 1% of Shungite is classified as Elite or Noble, and it has a shiny, silver appearance.

Shungite stones with a higher carbon content have a higher fullerene count, making them more powerful and fast-acting.

Shungite does wonders for maintaining your bio-energy system at optimal levels. It clears all of the major chakras and layers of the aura. It can also correct energetic imbalances in your system while promoting energy flow. Shungite speeds up the body’s natural healing response, and it offers pain relief. It also has a wonderful balancing and uplifting effect on emotions. It is especially helpful when you are feeling stressed, anxious, overwhelmed, angry, or depressed.

Shungite creates a protective shield around you that prevents various forms of negative energy from infiltrating--such as entities, psychic attacks, harmful thoughts and emotions, and especially EMFs. It has been scientifically demonstrated that Shungite can significantly decrease the detrimental effects of cell phone radiation and EMFs on the human body. Place Shungite near the source of EMFs (such as electrical devices or your WI-FI router) or wear it as jewelry to block the negative effects.

Shungite can also help you with grounding, root chakra issues, and forming a solid Earth connection. It is known to activate and stimulate the lower chakras while balancing overactivity in the higher chakras.

Nature’s Treasures is pleased to offer you these rare treasures, from Russia with love! They are sure to dazzle everyone, from the serious gem and mineral collector to the metaphysical maven.