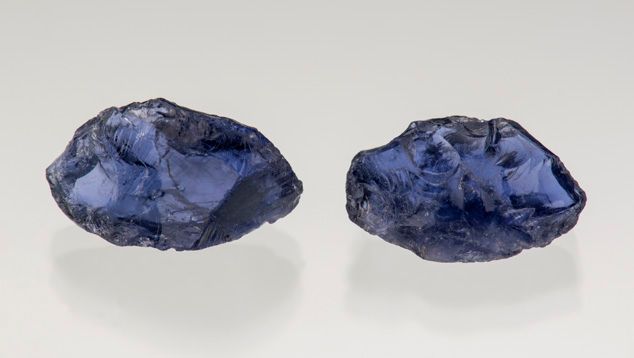 Iolite is the blue-violet variety of the mineral cordierite, (Mg,Fe)2Al3(AlSi5O18). Cordierite has many interesting optical properties including a high birefringence and dichroism. Dichroism literally translates from Greek as “two colored” and describes when a mineral appears different colors down its different axes. In the case of Iolite, the gemstone changes color from yellow to purple, the color for which iolite is named (in Greek ios meaning “violet”). Despite its name, Iolite is better described as indigo in hue.

Iolite has a strong birefringence or polarizing effect, which could make it great for reducing glare when fashioned into a lens. According to Robert Weldon, director of the Richard T. Liddicoat Gemological Library and Information Center, this property of Iolite made it useful for ancient Vikings to navigate the seas when it was cloudy out and Iolite became known as “Viking Compass Stone”. The idea of Iolite acting as a tool for guidance and navigation has pervaded into modern metaphysical and spiritual uses for this stone as well.

Iolite is probably the foremost stone used for foresight and is one of the most sought after stones for Third Eye Chakra work as it is one of the few truly “indigo” colored stones in nature. According to Melody, author of Love is in the Earth, Iolite stimulates visionary prowess by inciting visions and improving their accuracy, especially during shamanic journeying, astral travel, and guided meditations. She says specifically that Iolite “has been used to stimulate a compass, such that one may have knowledge of directions and directional forces,” helping one to navigate obstacles that might block progress towards harmony within oneself and one’s relationships. Iolite not only helps one to access information with increased accuracy, but it also guides you in applying that information for the greatest good. In other words, this helps you to not only know what is going on, but the best way to present or share that knowledge so that it is well-received and beneficial to the recipient. This has led me to coin the mnemonic “Eye of Light” (I-O-Lite) to remember that this gem not only activates one’s Third-Eye, but also enhances our ability to bring harmony to the world through enlightenment.