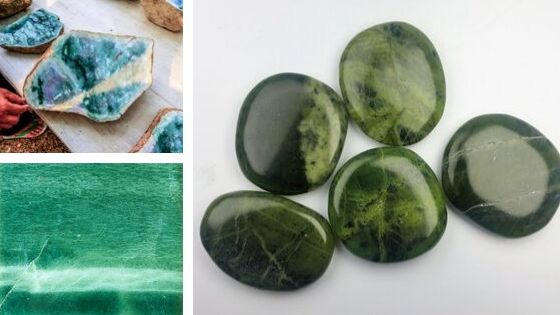 Jade: An Ambiguous Term for a Tenacious Stone

Although Jade holds great value in many cultures, it has also become one of the most ambiguous gem names on the market. Knuth outlines a progressive history of Jade in Gems in Myth, Legend and Lore. What we know today as “Jade” originally referred to the mineral Jadeite and became popular in China early on. However, early Spanish explorers discovered a similar material that became known as Nephrite due to natives using the stone as a cure-all for kidney problems (nephros means “kidney” in Greek). In the 16th century, the term piedra de hijada became widespread in Western civilization and over time became shortened to the modern name “Jade”. These traditional Jade species, Jadeite (Na(Al,Fe3+)Si2O6) belonging to the pyroxene group and Nephrite (Ca2(Mg, Fe)5Si8O22(OH)2 belonging to the amphibole group, continue to be highly revered across the world. In modern times, however, “Jade” has become an even more ambiguous term and is often applied to any tough green stone including Serpentine and, in some cases, Aventurine.

The most controversial and abhorrent application of the term “Jade” is to cloudy green glass or chemically dyed materials. Unfortunately locality is not much help with distinguishing between these various materials since many of them form in metamorphic regimes. South America, for example, has large deposits of Nephrite as well as Serpentine and Aventurine. China is known for producing Jadeite and Serpentine. Unbeknownst to many, Canada produces beautiful Jadeite, Nephrite and Serpentine. Jadeite, Nephrite and Serpentine, as well as various Green Jaspers, may all be referred to in ancient texts and interpreted as “Jade” due to coloration and toughness, so referring to ancient cultures or history cannot give many hints either.

For anyone that has ever worked with Jade, you know that it is a tough material, being hard to break, cut, grind or polish. In the case of Jadeite and Nephrite, it is because they belong to the class of silicates known as inosilicates. This class of silicate is best conceptualized as having a crystalline lattice that resembles strong chains. As the chains get tangled up and interwoven amongst each other during the metamorphic processes that form both gem materials they become very difficult to break apart giving these varieties both resistance to scratching (hardness) and resistance to breaking (toughness or tenacity). This toughness is part of the reason this material has been used for tool working from as far back as 8500 BC according to Knuth’s research. Because of its color and mottled patterning, Jade has also been treasured as a gemstone throughout history, especially among stone carvers. The oldest known cultural references date back to around 1500 BC when the Chinese named it yu, meaning “precious stone.” Throughout history the green variety has always been the most noted and sought after. However, other colors of Jade exist. Jadeite can occur in lavender, red, yellow, black and white while Nephrite can occur in variations of yellow, black and white. It should come as no surprise that Jade (Jadeite & Nephrite) are considered stones of physical fortitude and healing (as well as abundance owing to its green color).

Serpentine is tough, but not particularly hard (less than 4 out of 10). This is because the mineral itself belongs to the phyllosilicate class of silicates. Phyllosilicates are structured with sheet-like lattices that can be sheered (along cleavage planes) or deformed but not so easily broken. Serpentine is much easier to grind and scratch than traditional Jade but can have a similar mottled or veiny coloration in hues of yellows and greens and therefore makes for a great carving material. Named for its patterned color resembling a serpent’s skin, this stone represents personal growth by helping one to shed off old patterns and parasitic people in their life. Because of its appearance, Serpentine can be indistinguishable from the traditional varieties of Jade except by using a hardness test. Serpentine can also have a somewhat chalky or greasy feel to it in its raw form.

Aventurine, a variety of quartz with green fuchsite inclusions, is another material sometimes called “Jade” and has a greater hardness (7 out of 10) than even the traditional Jadeite and Nephrite varieties (5-6 out of 10). Aventurine, being a variety of quartz, is a tectosilicate with a framework crystalline lattice. This framework can be thought of as highly structured and durable scaffolding. Because of this structure, all varieties of quartz have relatively high hardness and toughness. Aventurine is brittle despite this toughness and breaks similarly to glass. Of the faux varieties of Jade, Aventurine is probably the easiest to distinguish visually because of its typically homogenous coloring and the presence of sparkling flecks (the micaceous fuchsite included within the quartz). Once polished Aventurine also possesses a much more vitreous luster than Jadeite or Nephrite. Energetically, Aventurine is a stone of luck like the traditional Jade varieties, but unlike them it is not typically associated with physical endurance or healing.

Although the prevalence of Serpentine, Aventurine, and other tough green materials beings old as “Jade” has grown, most mineralogists and gemologists agree that this term should be reserved for Jadeite and Nephrite. Marketing Serpentine as “Serpentine Jade” is considered acceptable because of its similar appearance and lapidary properties to the traditional Jades. Hopefully the market in general can become more tenacious about disambiguating the term “Jade” with the help of consumers who know to ask.