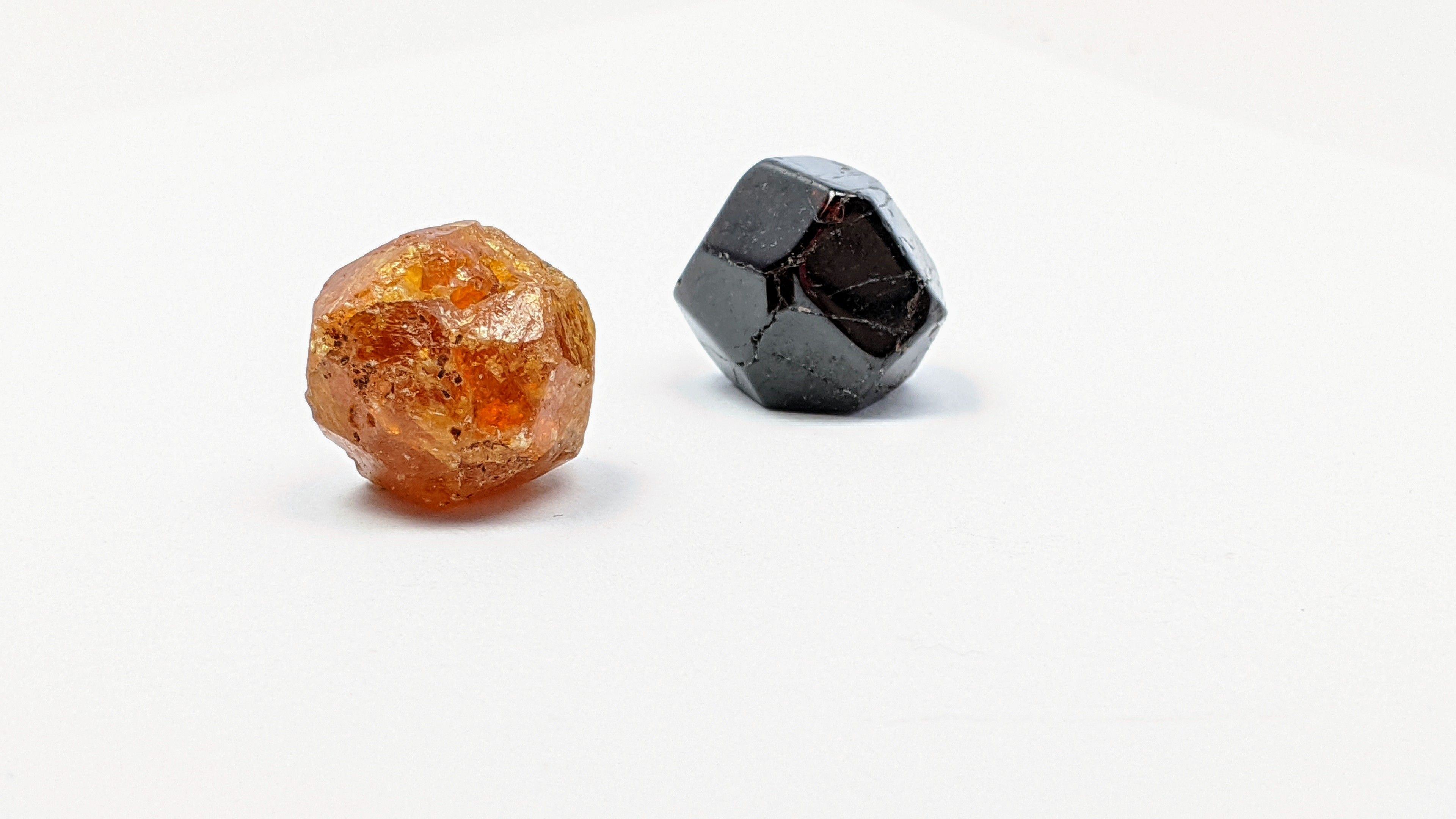 The name Garnet comes from the Phoenician punica geranatum meaning pomegranate by way of the Latin granatum or granitus, and refers to this crystals distinct crystal habit, color and luster. Garnet is the perfect stone to light our way into the New Year. With its warmth and healing properties, this stone keeps us moving forward in the dead of winter.

Legends and folklore place Garnet among the most ancient of talismans. Not only was it prized as an ornamental jewel, but its strong curative powers and protective energies made it invaluable to the ancients. Likely unbeknownst to the ancients, Garnet is a metamorphic mineral, meaning that it most commonly occurs in metamorphic rocks that form deep within the Earth under high pressure and temperature conditions. Since Garnet formed under intense conditions, it makes sense that it could bestow physical strength and endurance on the one who carries this stone. Even its own durability is proof of this, having a hardness of 7 and no cleavage planes to break along.

According to Knuth in Gems in Myth Legend and Lore, ancient Romans associated Garnet with the element of fire and Mars, the god of war, possibly lending to the belief that it is a stone of strength. Other attributes associated with Garnet over the eons include increased passion, prosperity, progeny, and immunity to poisons. Whether we are struggling to get over a cold or getting ready to take on the New Year with gusto, Garnet is a perfect stone to work with not only this month, but this season.

In modern times, new varieties of Garnet have been discovered based on chemical structure (X3Z2(SiO4)3, where X is a divalent cation and Z is a trivalent cation) and thus changed the classification of this single mineral to a mineral group. Garnet forms as uniquely shaped crystals that are oftentimes red with a glowing nature that would resemble pomegranate seeds. Although clusters of this mineral are known to occur, even they can easily be broken down into individual dodecahedral grains. Despite the origin for the name being based on its most common reddish hue, Garnet can actually occur all over the world in many different colors including orange, yellow, green and purple. A deposit in Japan produces rare iridescent Garnets known as “Rainbow Garnet” because the faces flash in various colors. Each member of this family has been given its own metaphysical properties by the new age community.

The following list of attributes have been synthesized and summarized from (1) Gems in Myth, Legend and Lore by Bruce G. Knuth, (2) The Book of Stones by Robert Simmons & Naisha Ahsian, (3) The Secrets of Crystals by Shani Toder, and (4) personal experience by the author.

Demantoid Garnet: a green variety of Andradite associated with strengthening the heart and providing emotional energy (3)

Grossular Garnet: can occur in yellow, peach, pink, white, and gray; associated with prosperity and health (2); enhances fertility, ingenuity and ability to compromise, especially in the face of legal challenges (1)

Hessonite Garnet: an orange variety of Grossular associated with confidence and seeking out challenges for personal growth; useful for those in fields of service (3)

Melanite Garnet: a black variety of Andradite associated with physical and energetic protection from negative forces (4), grounding, knowledge and creativity (2)

Pyrope Garnet: a red variety associated with stabilizing the body (1)