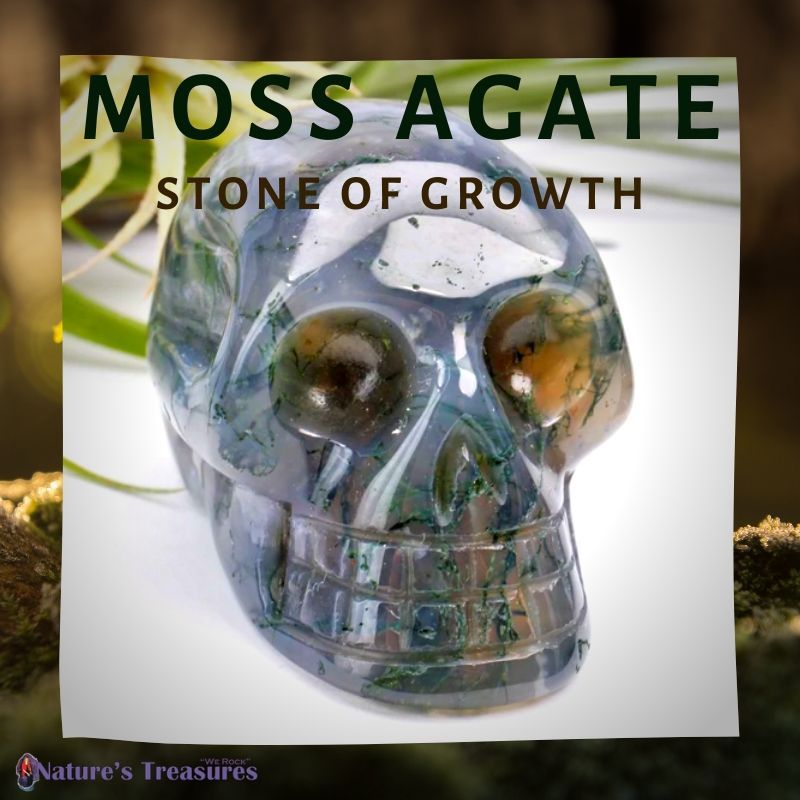 Moss agate is a beautiful milky white to translucent stone with green dendritic patterns that has a likeness to moss or little trees. It is a stone of growth and considered to be the best stone for gardening and agriculture. The patterns you see within this stone resemble growing plants and it's a stone that will help you grow in many ways. Learn more about this fascinating stone below.

Despite its appearance, Moss Agate does not have any organic or plant material in its formation. It has a chemical composition of SiO2, made up of Chalcedony (a variety of Quartz) with crystalline inclusions of Chlorite, Hornblende and/or green Amphibole which grow looking like leaves or branches. Oxidation changes in development create colors like red, blue, yellow, purple and black within the stones. The darker black or brown dendritic patterns in Moss Agate are made of Iron or Manganese. Although Moss Agate is not considered a "true" agate due to its lack of banding, it is still classified as an agate as it is made of silicon dioxide and has multiple colors & patterns as agates do.

Moss Agate rates 6.5 to 7 on the Mohs Scale of Hardness. Because Moss Agate is a fairly hard stone, you need to be careful not to have it near other softer stones that it may scratch. Do not use harsh chemicals, steam or sonic cleaners on Moss Agate. Gentle washing in warm soapy water will clean it beautifully. 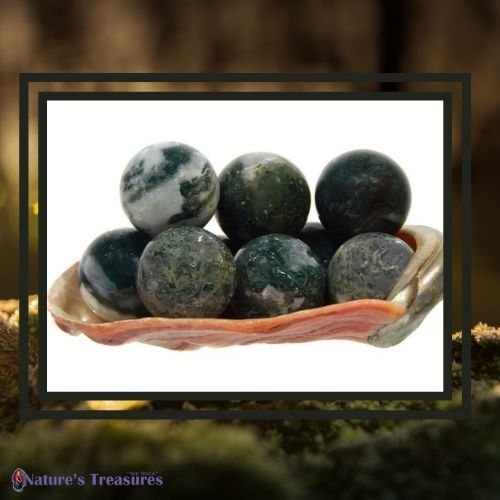 Throughout history Moss Agate was, and is still, considered to be a stone of agriculture. Farmers in Europe used to hang Moss Agate from their trees to help with bountiful, successful harvests.

The British considered it to be a stone of good luck in the 18th century. Melody, author of Love is in the Earth, informs us that the Native Americans used Moss Agate as a Power Stone and that agate was thought to be in Aaron's breastplate.

This stone is also known as the Midwives Stone because it was said to be used to assist in an easier, successful delivery. If you want to give your midwife a thoughtful gift, consider giving her a piece of Moss Agate or jewelry made with this stone. It was also believed throughout history to be an excellent stone to stop bleeding. 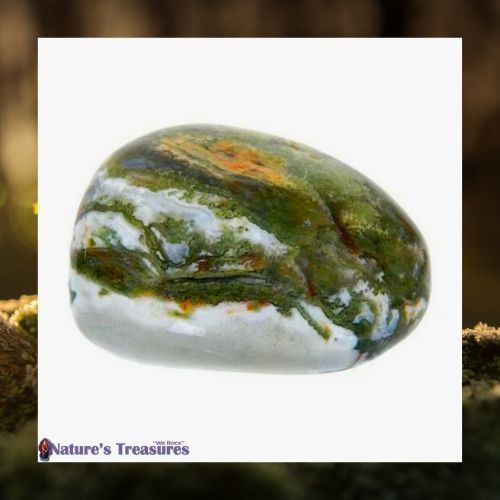 Moss Agate is said to be one of the most powerful all around healing stones. It is said to be good for agriculture, childbirth, creating abundance, and improving self-esteem.

This stone has been used for centuries to help people strengthen their immune system and recover from major illnesses. In The Crystal Healer, Philip Permutt writes that Moss Agate is a good stone for detoxing, cleansing and recovering from a cold or flu. If in pain or injured, crystal healers recommend placing Moss Agate directly on the troubled spot for relief. Many metaphysical authors believe Moss Agate is great for our heart, circulatory, and nervous systems due to the dendrites within the stone resembling our own network of veins and the dendrites found in the neurons of our nervous system.

Moss Agate is seen as a Yin Yang stone that helps to balance the masculine and feminine sides within. Let this stone assist if you are feeling strongly aggressive or excessively nurturing to calm and balance your energy. Additionally, if you are experiencing mental imbalances such as depression, anxiety or grief, Moss Agate is said to help ease and soothe these uncomfortable feelings. Moss agate is also said to strengthen the Heart Chakra, inspire an awareness of our inborn abundant nature, and foster an attitude of gratitude. 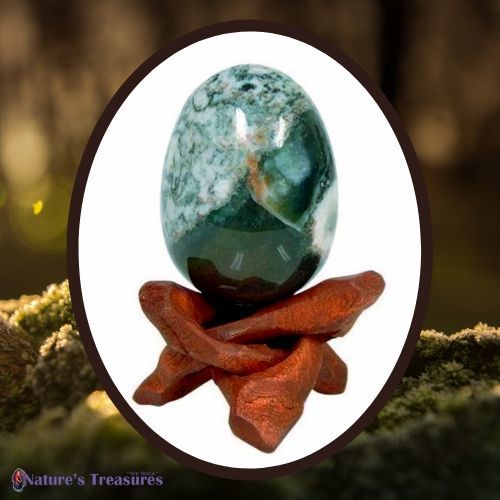 HOW TO USE MOSS AGATE

Moss Agate is a wonderful stone to use when gardening. It helps us connect to Mother Earth and develop a reverence for nature. Many people swear they have an especially abundant crop or report remarkable plant growth when Moss Agate is placed in the pots of plants, in the garden soil, or around the yard.

If you are looking to treat yourself or want a unique gift for someone else Moss Agate is definitely worth looking into. A Moss Agate egg is truly beautiful to look at; you can gaze at it and always see something different. The egg shape in crystals symbolizes new beginnings and fertility, which can be taken in a literal or spiritual sense. If you have a goal or intent that you want to manifest, meditate with the egg and set your intention that you will see that goal or project fertilize and grow into what you wish.

Other Possibilities: Many people love to gaze at Moss Agate crystal skulls. Some meditate with them to amplify their healing ability or to intensify the energetic properties of the stone. A Moss Agate massage stone feels wonderful for Massage and Acupressure. Moss Agate is a Heart Chakra stone so a Moss Agate heart shaped stone is always appropriate. Jewelry, tumbled stones, spheres and stars are great ways to treat yourself and others, too!

Moss Agate is such a beautiful stone to help you along your souls journey. It helps us to remember that as long as we are alive, we never stop growing and abundance is always with us!