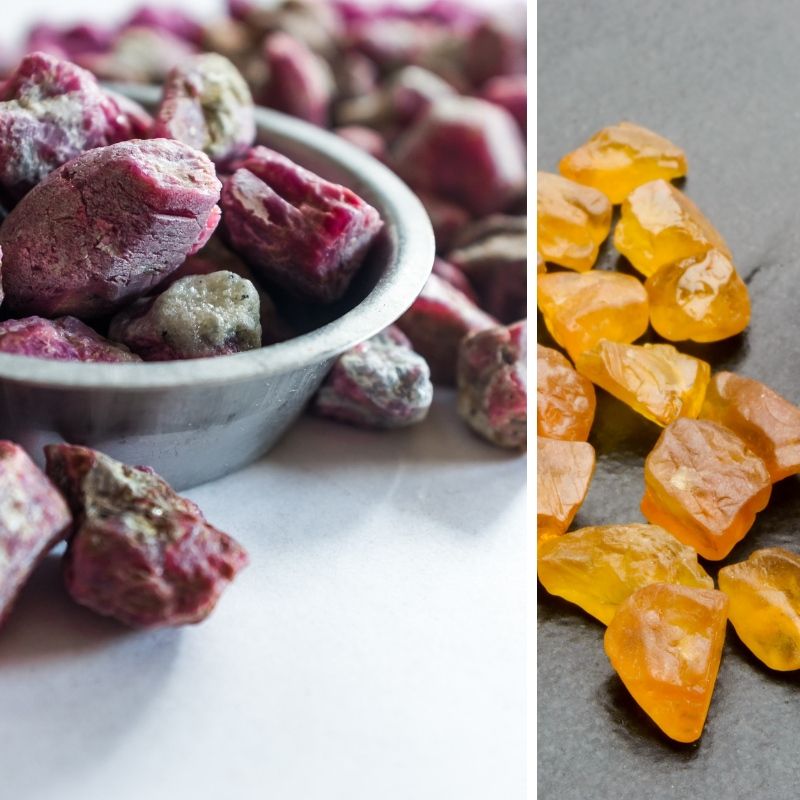 To provide some disambiguation Sapphire can occur in many colors and belongs to the Corundum (Al2O3) family. In its purest form, Corundum would be white (if opaque) or colorless (if translucent) because aluminum (Al) and oxygen (O) are both colorless. However, because this mineral is allochromatic sometimes coloring agents known as chromophores can substitute in for some of the Al and cause different colors. For example, a combination of titanium (Ti) and iron (Fe) produce the well-known Blue Sapphire. Regardless of what causes the color, Corundum can be red, orange, yellow, green, blue, purple, black, white and any color in between. The red variety of Corundum is known as Ruby from the Latin ruber meaning “red.” Every other color of Corundum is known as Sapphire, even the pink ones!

In ancient times, the terms sapphirus, sappheiros, sappir and sanipriya were applied to many opaque blue stones, especially in western civilizations according to Bruce G. Knuth in his book Gems in Myth, Legend, and Lore. For this reason, some texts refer to what we know today as Lapis Lazuli as “Sapphire”, making it difficult at times for historians to determine which stone was actually being described.

However, because of the prevalence of Corundum in ancient India, Knuth believes that most Indian lore refers to what we know as Sapphire today. This is further supported by the origin story for precious gemstones found in Vedic texts, which say that when the demon god Vala was defeated his organs turned to gem seeds of different colors wherever they landed with some being yellow and some being blue.

In fact, it could be this very story that inspired many of the known metaphysical properties of Sapphire. For example, Sapphire is known as a stone that makes you favorable in the eyes of God. Vala was a demon god that overthrew the Vedic pantheon. It would make sense that this stone that formed from Vala’s defeat would be a symbol of good fortune and give the blessing of the heavens. Vala was defeated by Brahmanaspati using the power of prayer, and Sapphire today is reported to aid in spiritual endeavors and meditation. Blue Sapphire is said to be used to cure ailments of the eyes and the blue eyes of Vala are what are believed to have become Blue Sapphire. However, this theory falls short when one considers that Yellow Sapphire formed from the skin of Vala, but is known more for removing toxins from the body and is associated with the spleen and liver.

Regardless of where the metaphysical properties originated, Sapphire has different affinities or properties depending on the color, which of course are also different from the properties of red Ruby.

Here is a list of properties for each color of Sapphire that has been synthesized from (1) The Crystal Bible by Judy Hall, (2) Love is in the Earth by Melody, and (3) The Book of Stones by Robert Simmons & Naisha Ahsian.

· Pink Sapphire: teaches one how to master and release the emotions (1)

One more disambiguation should be made about Sapphire. On rare occasions the mineral Rutile can form along the six sides of Corundum crystals. Because of Rutile’s high luster, when the Corundum cross-section is cut and polished a six-rayed star known as asterism can become visible from the light reflecting off the Rutile fibers. This optical phenomenon can occur in both Ruby and Sapphire. Metaphysically the “Star Sapphire” imbues one with a high level of discernment especially when it comes to others’ intentions and helps one to focus their thoughts (1,2,3) in addition to the color properties for each Sapphire.

So, although Corundum occurs in a wide range of colors, it can be name only Ruby or Sapphire. Just remember that Ruby is always and only ever red and every other color of Corundum is Sapphire. All Sapphires are associated with auspiciousness and spiritual awakening, but each color has slightly nuanced metaphysical properties. The “Star” effect can be found in both Ruby and Sapphire and is an additional descriptor to the color.

With all this information, you can be confident in your knowledge of conundrum as a mineral.