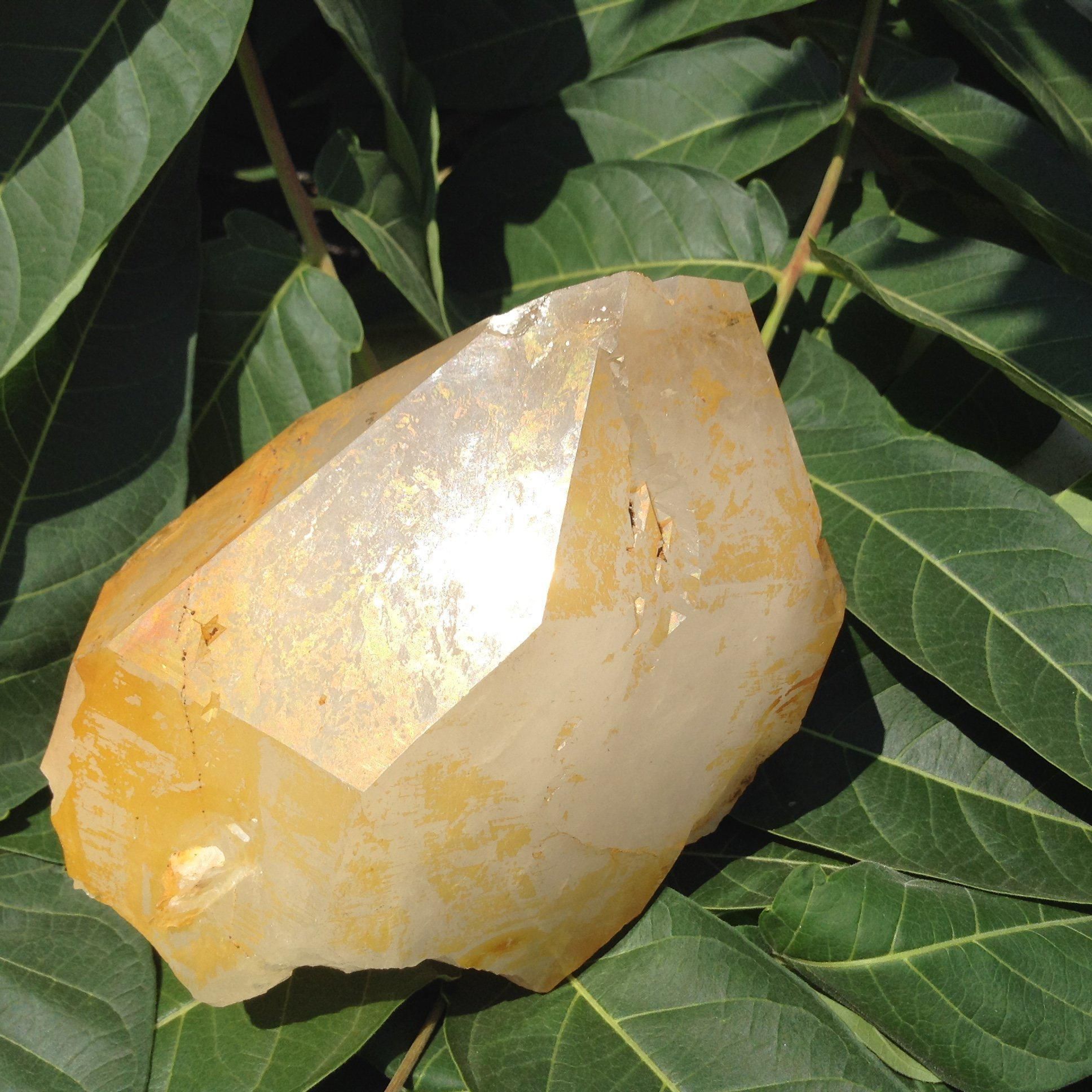 Solaris Golden Healer Quartz, originally named by the Nature's Treasures Family back in 2012, is a variety of high-grade quartz from Arkansas with a natural iron-titanium coating that formed as the quartz grew within an iron-rich clay matrix. Some believe that the coating resulted from lightning striking the ground where the quartz was found. As the high voltage electricity flowed through the metalliferous clay some of the iron and titanium became "electroplated" onto the surface of the otherwise crystal clear quartz. The crystals themselves appear yellow to orange in hue but many have a rainbow iridescence that shimmers across the surface.

When the Arkansas Miner, Don Burrows, first discovered this golden material on his property he had no idea what to call it so he brought it to his longtime friend and owner of Nature's Treasures, Karen Richards, asking for her input. Rather than naming the material herself, she was guided to share a piece with each of her employees at the time, asking them to meditate with the unique crystals to get insight into their unique energies. Some employees submitted ideas for names (all of which focused on the strong Sun-related energies of the stone) ranging from Ra Stone to Sol Quartz and so forth. The names were presented to Nature's Treasures customers and followers who voted and decided upon the name Solaris Quartz. Since then a similar material has reached the market and become more widely known as "Golden Healer Quartz," which refers more generally to any of the quartz varieties with a golden coating occurring in Arkansas and Brazil.

The employees that first experienced this stone all had slightly different interpretations of its energies, but one common thread was its association with the sun, especially Mayan, Aztec and Egyptian portrayals. A former employee, Lisa Tillman, experienced the Solaris Quartz “[carrying] a rainbow energy that penetrates the solar plexus chakra, filling it with the golden light of Ra…(and) shining its rays throughout the whole chakra system.” Back before becoming the Nature's Treasures Retail Manager, Michael Kallstrom was one of the fortunate ones to be gifted a piece of Solaris Quartz and first work with its enlightening energies. He recalls his experience…

I still have my Solaris Quartz at home in one of my displays. I remember working with it and instantly getting visions of fire and light and feeling totemic energy of the Phoenix which propelled me through a dream quest of sorts. I knew one of the stone’s purposes was to open individuals up to experiencing the Oneness of the Universe and being interconnected. More personally, I felt the stone helped me simultaneously experience my soul outside of time. I guess another way to express it would be that the Solaris Quartz helped me to experience past life regression while also reaching forward to my soul’s future wisdom so that I could integrate all of my soul’s potential into the present moment. The motifs of the Sun (Sol in Spanish), Oneness (or a Sole experience), and Soul potential, led me to propose the name “Sol Quartz”.

Regardless what your individual experience might be, the Solaris Quartz from Arkansas has a unique energy associated with its golden color and iridescence. The coating can be removed through abrasive scrubbing or soaking in warm salt water and chemicals designed to remove iron staining to reveal a clear quartz interior, so these crystals are best cleansed by setting them out in sunlight.