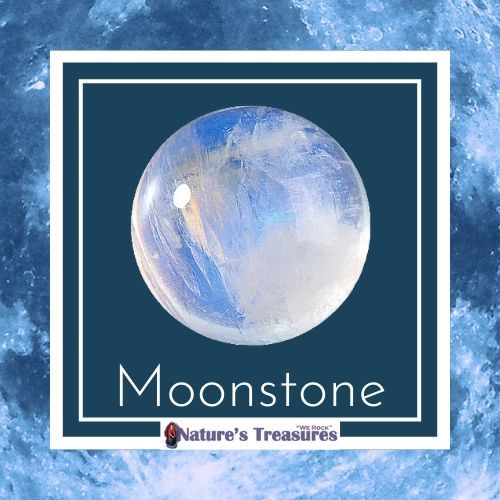 June is known to have several birthstones. Along with Pearl & Alexandrite, Moonstone is a popular choice for those born in June. Moonstones have a timeless beauty and is forever connected to the Moon. Whether you are born in June or just a fan of this enchanting stone, learn more about the different types of Moonstones, its history, and metaphysical healing properties here. 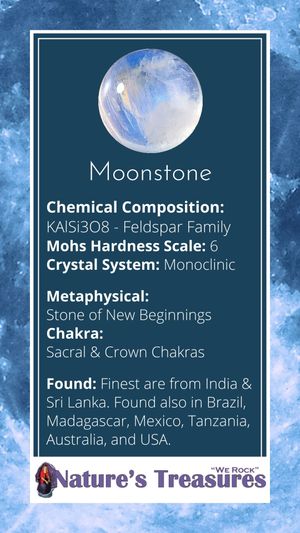 Moonstone is a highly sought after gem known for its adularescence, or play of color that flashes in the light, which resembles moon rays dancing on a body of water. It is an Orthoclase Feldspar with the chemical composition of KAlS308 (Potassium, Aluminum, Silicon, Oxygen). Moonstones come in many colors, including white, peach, gray, green, brown and black. Generally speaking, the more noticeable its adularescence along with its clarity determines the gem value of this stone; however, beauty is in the eye of the beholder so it is best to choose a Moonstone that is attractive to you.

Rainbow Moonstone is very beautiful and popular. and yet it is not a true Moonstone. It is a Plagioclase Feldspar with the chemical composition of (Na,Ca)AlSi3O8 (Sodium, Calcium, Aluminum, Silicon, Oxygen), which is the same composition as Labradorite. According to the GIA “Rainbow Moonstone is transparent Labradorite, a closely related feldspar mineral with sheen in a variety of iridescent colors. Although it's technically not Moonstone, it's similar enough that the trade has accepted it as a gem in its own right.” That said, they are still an appropriate alternative to true Moonstone as they have a similar play of color and recall the magic of moonlight in our psyches. Rainbow Moonstone is white or colorless with a bluish or rainbow sheen; the bluer the sheen the more valuable and sought after it is. It often has inclusions of Black Tourmaline.

All Moonstones rate 6 to 6.5 on the Mohs Scale of Hardness. While that means they are fairly high on the scale of hardness it is also a bit softer due to its composition. Treat your moonstones gently to avoid damage. To prevent scratches, is best not to store them with other stones that are stronger, such as: Quartz, Topaz, Beryl and Diamonds. Keep them away from from steam, strong chemicals and sonic cleaners. Wash them with warm water and gentle soap and your moonstones will be beautiful forever.

Moonstones can be found all over the world but especially fine specimens come from India and Sri Lanka. Other popular mining locations include Australia, Brazil, Madagascar, Mexico, Tanzania and the USA. 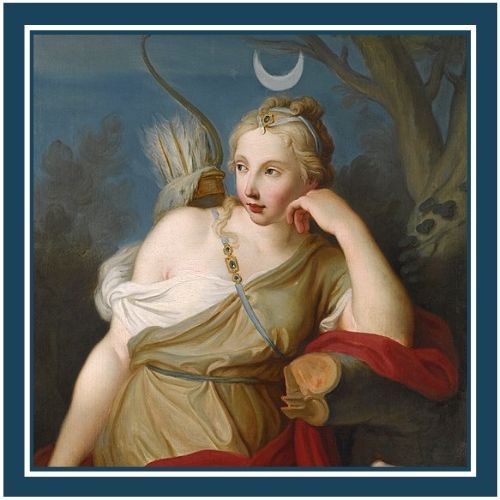 Moonstones have always been associated with the Moon. The ancient Hindus, Greeks and Romans believed Moonstone to be solidified moon rays or moonlight frozen in rocks. Some believed you could foretell the future if you put a Moonstone in your mouth during a Full Moon. This practice is obviously not recommended today.

Moonstone has been a favorite of ancient civilizations to wear as jewelry or talismans. Moonstone was also very popular in the early Victorian era. In the Early Twentieth Century, during the Art Nouveau period, Moonstone was used by goldsmiths and other artists to create highly popular jewelry. Today Moonstones remain as a very sought after jewelry gemstone. As mentioned before, Rainbow Moonstone is what most people seem to prefer.

The Moon is important to humans and still serves as a tracker of time and a source of calendar systems in many cultures. It's no surprise it has been personified and deified for millennia. The Moon is believed to be a symbol of the Divine Feminine in all of us and has many Goddesses associated with it. Some of the most recognizable Goddesses Moonstone is associated with are as follows.

All moonstones are associated with the Roman Goddesses of the Moon, Diana and Luna, and their Greek counterparts, Artemis and Selene. Other deities associated with this stone are the Chinese Goddess, Chang'e; Mayan Goddess, Ix Chel; the Aztec Goddess, Coyolxauhqui; the Sioux Goddess, Hanwi; and many, many other Lunar Gods & Goddesses found in other cultures. 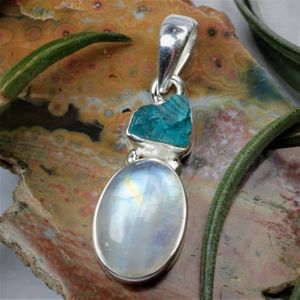 Moonstone epitomizes the Divine Feminine and is good for feminine health and well-being throughout a lifetime, such as menses, balancing hormones, childbirth, and menopause. However, this stone is not just for women because it helps both women and men to become more attuned to their creative and nurturing feminine side.

Moonstone is a stone of New Beginnings known for it's ability to assist in navigating the tides in life and gently encouraging change. If Life requires you to begin something or start again, call on Moonstone! It also helps to initiate endings or receive closure so as to birth beginnings free of the past. For these reasons, along with its appearance that resembles moonlight, Moonstone is one of the most popular stones (the other being Selenite) to use during Full & New Moon Rituals.

Other beneficial healing properties attributed to Moonstone are: keeping the chakras and aura clear, cultivating peace of mind, relieving stress and anxiety, and bringing good luck and inspiration to those who choose it. Moonstone is also thought to be one of the best stones for helping us send healing energy to our great planet that nurtures us.

If you are attracted to Moonstone you can carry or surround yourself with them, wear them as beautiful jewelry, or use a massage wand made of it for a special treat. Consider a beautiful Moonstone sphere that you can derive inspiration from while letting its energy flow in all directions in your home. Palm stones are lovely to hold while meditating and this stone is excellent to help facilitate peaceful and balancing meditations. Moonstone is also excellent as a pendulum since it is known for inspiration and wisdom.

Below are some special considerations for different kinds of Moonstones to help you choose the perfect Moonstone for the use you have in mind.

Moonstone comes in a variety of colors. From white, to peach, to gray, and brown, all of them resonate to the frequency of the Divine Feminine. They are connected to the nurturing and gentle energies of the Moon, and as such, are suitable tools for physical well-being, inner and emotional journeys, and ritual work during all phases of the Moon.

Green Moonstone is a rare Moonstone that embodies the healing force of the Divine Feminine and connects strongly with the Heart Chakra. It enhances the ability to heal emotionally and give love to oneself and others. Green Moonstone is also one of the best minerals for connecting with Gaia, Mother Earth, and Goddess energy.

Black Moonstone is one of the best stones to harness New Moon energy. Believed to be especially helpful in new beginnings, this protective mineral with a lovely peach sheen has a calming effect to help with change and transformation.

Rainbow Moonstone is special due to it having the metaphysical properties of both Moonstone and Labradorite. This combination makes it a most powerful, magical and fortuitous crystal ally. Philip Permutt in Crystal Healer Volume 2 says Rainbow Moonstone “Brings insight, flashes of inspirations (rainbow moments to remember forever), and creativity.” They are especially popular to use during the Full Moon.

Happy Birthday to all our June born friends! We hope you have enjoyed our special June birthstone blog and feel empowered knowing you have such a lovely stone steeped in the mysticism and magic of the Moon by your side. May all the nights of your life and Moonstone remind you how truly special and powerful you are!