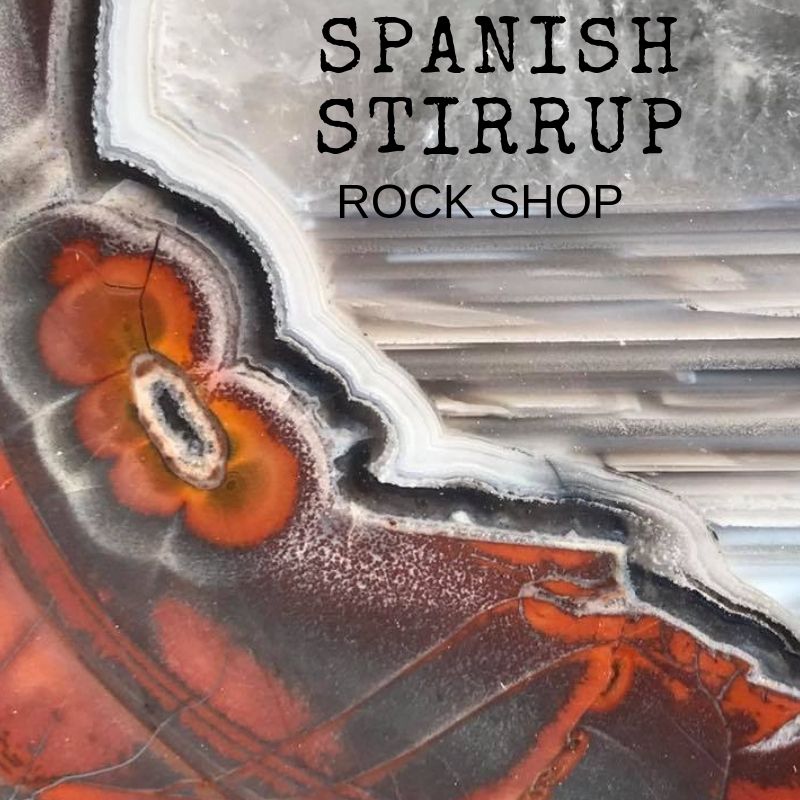 Lori Lytle Coleman, owner of the Spanish Stirrup Rock Shop, got her rock hounding bug while farming with her late husband in the Mississippi Delta in the 1980's. It started with picking up rocks in the field before planting then became a fascination with arrowheads on the surface after a good rain. She went on to collect petrified wood from the creeks and streams in the Mississippi hill country during hunting season. Family vacations to Arkansas were for fishing and collecting quartz crystals.

After retiring they decided to move to Deming, NM to hunt for Thunder Eggs. This is where the Spanish Stirrup Rock Shop began. Propped on top of a hill not far from Rockhound State Park is Lori's home, once called the Spanish Stirrup Guest Ranch. You see, the family that donated the ground where Rockhound State Park is now located is the same family that founded and settled the area and named what is now Lori's home. The name Spanish Stirrup came from the discovery of a conquistador’s stirrup up in the Big Florida Mountain after a day of herding goats. It was placed in the saddle bag and taken back to the ranch. Later the road to Rockhound was named Stirrup Road.

Lori, along with her children and fiancée Bruce, have spent many days walking the Florida Mountain and areas along the Mexican border, in search of Thunder Eggs. What began as a fun hobby has now become a full blown passion! Lori now has over 1,500 acres of Federal, State and Private land with many mines. She is now considered a commercial miner of Thunder Eggs due to the volume of her operations. A savvy and hands-on miner, she writes all of her own mining plans of operation, and as a licensed big equipment operator, she is happiest down in the dirt finding new treasures. Lori Lytle Coleman's most famous agates are from the Lava Cap and Eggzilla Mines (more photos available on the Spanish Stirrup Rock Shop’s facebook page).

Lori is a familiar face at all the major rock shows in New York, Wisconsin, Denver, Quartzite, Tucson and San Antonio. Her collection of Thunder Eggs is currently on display that the New Mexico Museum of mining to the delight of agate lovers lucky enough to visit. She has been featured in the prestigious German publication Mineralien Welt , The Wall Street Journal and Rock and Gem Magazine. Many agate fans know her from her features in the famous Gem Shop Agate Calendar the last 5 years running. An engaging and knowledgeable speaker, Lori was also well received at the Denver Club show (twice!) and at

the 2016 Agate Expo. Nature's Treasures Texas is honored to have her as the Keynote Speaker for the 2019 International Exposition of Agates in Austin, Texas.

Click HERE to visit the Spanish Stirrup Rock Shop online or HERE to meet Lori at the International Exposition of Agate!